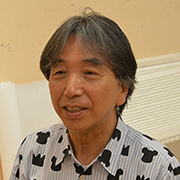 Born in Iga city, Japan in 1941. He started drawing Manga, or comics, in high school and intended to be an animator while studying in Osaka University. After working for Yoji Kuri, he became independent animator and illustrator and set up Takun-box Inc. in 1970.

Not only “Phenakistiscope” won special distinction in Annecy International Animated Film Festival in 1976, but also his works such as “Oxed-man”, ”from heart to heart”, “TYO STORY” etc. have been highly regarded and he has worked for NHK regularly. His retrospective was screened in Ottawa International Animation Festival 2002. In addition, he has released collections of his paintings and picture books as an illustrator and won domestic award.

He received the Order of Purple Ribbon in 2004 and the Order of the Sacred Treasure, Gold Rays with Rosette in 2012. Guest professor in Tokyo Polytechnic University and the president of Japan Animation Association at present.